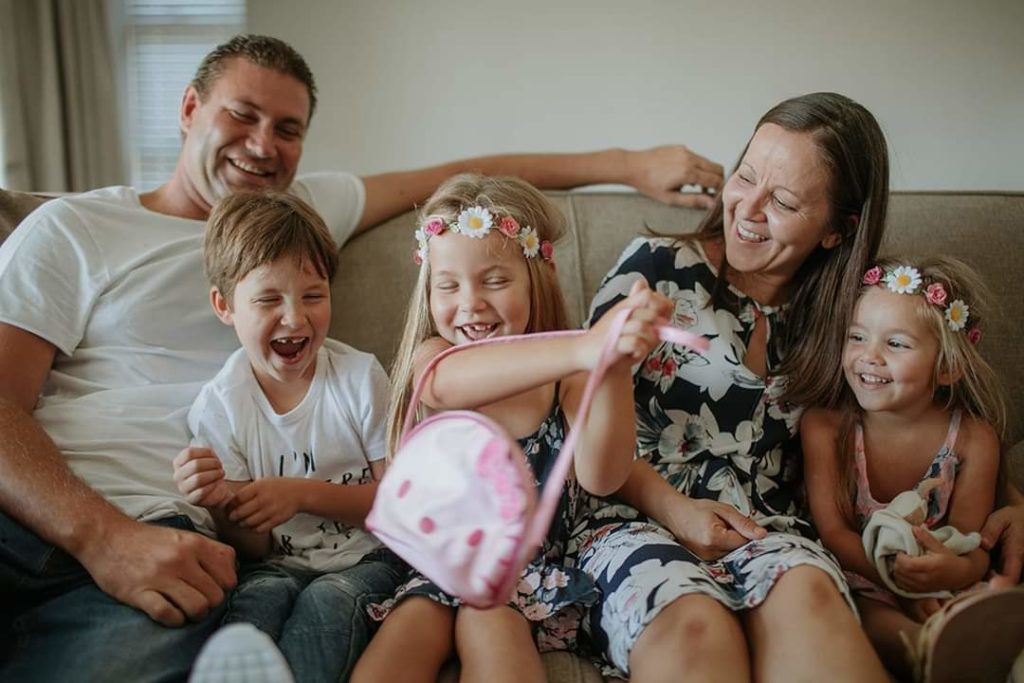 On the 2nd June 2009, Darren and I welcomed our beautiful baby boy into the world. We couldn’t imagine anything beating the way we felt that day – the pure elation, love and joy! He was perfect!

We were young, both had 8 – 5 jobs, Noah was unexpected, but the moment we found out we were expecting – it forever changed us. We were ecstatic! I have always said that Noah is my silver lining – he will always be. God knew what we needed before we did! Being his Mom was the single most important thing to me – being Noah’s Dad was the single most important thing to Darren. I could not return to work after maternity leave – the thought of having to leave him at just 3 months old absolutely killed me. Darren was supportive of my decision & we knew we would make it work somehow.

He was such a content baby, bubbly boy toddler & he reached all his milestones timeously.

Fast forward 2 and half years and our beautiful Cassidy was born on the 17th May 2012. She was all things cute, cuddly and soft – just a perfect baby girl. Noah was besotted with his baby sister! That year at the end of November we moved to Ballito. It was scary for us, both moving out of our home town – all that we ever knew, but boy we don’t ever look back!

We put Noah into a newly built Private Pre-Primary school close to where we live, he was just 3 and a half years old. We were very excited for this new journey in our lives, him making friends & watching him grow in this new part of his life. Around June that year just after he turned 4 is where our Autism Spectrum Journey began.

His teacher said that he was becoming destructive, throwing objects around the classroom, on occasion biting classmates (which we learnt was through frustration – his lack of verbal clarity), not being able to sit and pay attention during morning Ring Time. As parents, we thought: how could he be a handful in a class with just 7 kids, he was just a little boy. He was super bright. I remember Noah being just 2 years old and he had learnt the entire Alphabet, and not parrot fashion. If I wrote letters down randomly, he could tell me the name and sound. He could recite The Gruffalo word for word from the story book, but could not yet read. It was difficult to understand at the time what our little boy was going through, so we started off with an assessment from an Educational Psychologist. After lengthy paperwork & 5 sessions, Noah was diagnosed with Pervasive Developmental Disorder (PDD): a group of disorders characterized by delays in the development of socialization and communication skills. She had recommended an Occupational Therapy assessment, a Speech and Language assessment, consultation with a Dietician, consultation with a Paediatric Neurologist, and possibly having a facilitator at school with him to keep him on task. Just let that sink in for a bit?? We were quite overwhelmed to say the least! Where do we start, where do we begin? She had given us some recommendations, and so we followed through with the necessary assessments, which involved loads more paperwork & many hours in waiting rooms. We took it step by step & just wanted to do what we needed to do for our boy. In October that year we removed Noah from school, as he was beginning to be segregated from the class during certain tasks & we did not agree with that. We felt that he was becoming targeted and therefore left out.

A week prior to that we had welcomed our youngest, Meeka into the family. So there I was, a full time stay home mom with a 4 year old, a 17 month old and a new-born baby! It’s one of those things where you think how on earth are you going to cope: breastfeeding a new born, & being present for your two toddlers, but then one day you look back, and you did. Somehow by the Grace of God, you did. In the midst of it all you’re still trying to give each child what they need & then the extra therapy required for Noah. Darren and I had many arguments, mostly because we were overwhelmed by it all, how would we cope with all the extra costs that therapy required. We just wanted life to be ‘normal’, and didn’t really know how to deal with it all.

We had put Noah into a lovely little Daycare recommended by his OT at the time, for social stimulation in 2014, and in 2015 he did Grade R at a well-established Pre-Primary School. By the end of Noah’s Grade R year we had to think about him moving onto Grade 1, and I just knew in my heart of hearts that our boy would not be able to cope in a mainstream class, where there are a lot of kids and a lot of distractions.

I remember hearing about Bloom during the course of his Grade R year, I phoned Nicola Stirton one morning and she had said that they were just in a small building in Ballito with a handful of kids, but I was welcome to come and see her. Not giving it too much thought, we never followed up. At the end of the year we then contacted Nicky again, as we realized that Bloom would become a real possibility for Noah. Darren and I again were quite overwhelmed by the fact that he might need to attend Bloom, mainly because of the cost, but as his father he has been the most amazing support! We are so blessed by the fact that whatever we needed to do for our children, he made a way for it to happen, and still continues to!

Noah did his one week trial at Bloom (they were now at a new premises), where throughout the day he was assessed by the Therapists, monitoring his behaviour. It was decided that Bloom would be the best schooling facility for him, a facility best suited for his needs.

Cassidy and Meeka were home with me during the first half of Noah’s first year at Bloom, before we put them into a beautiful little Playgroup. There were traits of Cassidy that I could tell were different, some of her mannerism’s. She used to yell out quite a lot, her speech seemed quite delayed, and she also had the tendency to obsess over certain objects – carrying around handfuls of toys all the time. Outings were a real challenge with her as she would run off all the time. She was also still in nappies close to 4 years old. So just before she turned 5 years old, we decided to have her assessed at Bloom Centre, where she also spent a week there for her trial. Cassidy started her journey at Bloom in April 2017 as we also decided that it would be the best suited environment for her to thrive.

Autism brings so many day to day challenges. Our kids are not happy go lucky kids, whatever the situation may be. If we are planning an outing, whether it small or big, I mentally scan the area to think of any possible distractions that might cause the outing to be more stressful than enjoyable. They don’t make friends easily as other kids don’t understand them: their lingo, or what they want to talk about – their difference to them is so evident. There has been a few incidences over the years of bullying on a playground and it shatters your heart. Every parent has this vision for what they want for their children when they’re small, the school you plan on sending them to, the groups of friends you hope they’ll make. The diagnoses is difficult to deal with at first & you realize you have to go through all these avenues first to find a suitable facility for them to grow, and to learn and to thrive!

This is where Bloom came in. Our Journey at Bloom Special Needs Centre has been one of the most life changing, positive, encouraging and uplifting experiences. This is Noah’s 4th Year at Bloom, he started at 6 years old in 2016 and this year he turns the big 10! This is Cassidy’s 3rd Year at Bloom. We have learnt so much. Teacher Melissa van Huyssteen has been monumental in guiding us as parents, guiding us from an educational side – she is an angel sent from above! She has poured out her heart into our kids and just loved them for who they are. I hope she knows just how amazing she is! The love and care given by all the Teachers and Therapists has made this journey incredible. Teachers, Therapist and assistants who take the time to listen, take the time to care and understand your child as an individual – meet them where they are at, and love and guide them the way that they need. What more could you want from a school for your children? They have taught the kids and us so many coping strategies, again just always being there to guide us. Noah and Cassidy both love all their teachers and therapists so much, the peace is tangible when you walk into Bloom Centre.

When you are surrounded by that support, it gives you so much encouragement to face whatever comes your way. We have learnt to slow down, to take the time to really listen and see where the root of a behaviour might be stemming from. To meet our kids where they are at and not where the world thinks they should be. To just love and support them on this journey, as we learn together. We don’t worry so much about the future as we know they are on the best possible path right now, which can only lead them to where they’re meant to be.

They are incredibly gifted children who teach us so much, as  individuals we learn so much about ourselves and and how to be the best parent for them. They teach you to see out of the box, to have more compassion in life and towards other children with or without special needs. They are so loving and honest – there is nothing malicious about them. They are all three the best of friends, their bond is so strong! They are bright – super bright! Noah’s memory is something of a phenomenon! I feel honoured to be their Mom.

Yes, they are also incredibly demanding! It can be emotionally and physically exhausting, and some days you don’t know how you’ll cope till bedtime. God has given us the Grace to cope, and it’s a new day to start over, a new day to love, to slow down and listen. They are also trying to figure it all out just as much as you are.

I pray that our story is an encouragement to you if you’re in a similar situation, to not give up even if you feel like you want to. Take it one day at a time and know that our children just want us to love them and to be present.

I pray for more awareness in the community, I pray that parents would teach their kids at home that not all children are the same. We are unique, we all have something different to offer and we should embrace that. I pray that you would teach them compassion even if you don’t understand them. They are quirky and sometimes a little weird, but have so much to offer if you just took the time to listen.

In a World where you can be anything – be Kind ♥